This report provides a starting point for tourism businesses that are interested in exploring the opportunity of SWH. Specifically, this report focuses on SWH opportunities for small to medium sized hotels.

Since opening in 1995, Bay Gardens in St Lucia began exploring options to reduce their operating costs and soon after installed SWH system across the property with the help of Solar Dynamics, the only SWH supplier and installer in the region at the time. When asked what would happen if Bay Gardens were to move back to conventional electric heating, the maintenance manager, Kenneth Augustin shared, “Our operating costs would double!”…

The solar water heating system for Turtle Beach was installed in 1997 by Solar Dynamics. In all, the systems measure 251 sq.m., and are designed to serve 100% of the resort’s hot water load. Even with the occasional use of electrical boosters, the resort has reduced its energy bill for heating water by 95%.

Posted in: In the News, Reports

On January 16, 2016 participants in the IDB BRIDGE Project for Capacity Building in ICT and Sustainable Energy in the Caribbean, SEED (Student Entrepreneurial Empowerment Development Project) in Barbados and from the Edinburgh Napier University of the UK, toured Solar Dynamics Limited.

The group of 30, which included managers, directors, lecturers and entrepreneurs, heard from past and current managers about the company’s journey and on the successes and challenges of operating in the energy sector over the years. 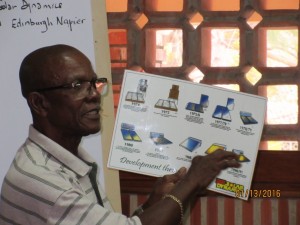 Ivan Franklin, co-developer of the Solar Dynamics Hot Water System, takes the visitors through the development stages of the system from 1973 to the present. 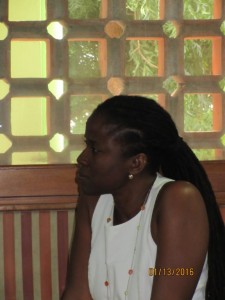 The Head of the UWI SEED program Attorney at Law Mrs Ayanna Young Marshall listens to the presentation of the Solar Dynamics journey. 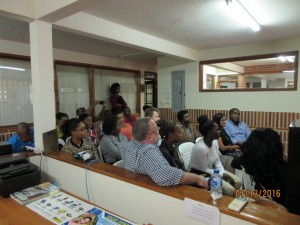 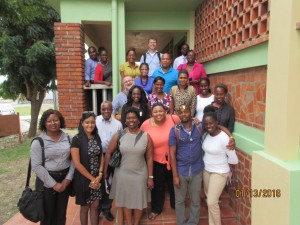 James Husbands speaks as a panelist at the Barbados Chamber of Commerce Luncheon- April 20, 2016.

ST. GEORGE — Prime Minister the Rt. Honorable Dr. Keith Mitchell, Prime Minister responsible for Science and Technology (S&T) in CARICOM has signaled his intentions to strengthen the S&T capacity in the region so that it can, in the shortest possible time, assist with economic and social development.

To achieve this objective, the Honorable Prime Minster launched at his Office on January 10, 2014 a CARICOM S&T Committee comprising of some of the region’s well known personalities who have been laboring in the vineyard of S&T for over a decade. These are Professors Harold Ramkissoon, President Emeritus of CARISCIENCE (Chair), Ishenkumba Kahwa, Deputy Principal of the Mona Campus, UWI, Dr. Arnoldo Ventura, former Advisor to the Prime Minister of Jamaica, Mr. James Husbands, Director of Solar Dynamics and Mr. Kent Mitchell. Representing the Diaspora in this Committee is Professor Cardinal Warde, Professor of Electrical Engineering at the Massachusetts Institute of Technology, USA.

The Committee has been mandated to, inter alia, swiftly promote the development of S&T in CARICOM as a tool for economic development by working closely with all Governments and scientific organizations in the region, and serve as an advisory body to the Prime Minister responsible for S&T in CARICOM.

The first meeting of this Committee took place in Grenada on January 10, 2014 at the Prime Minister’s Office. 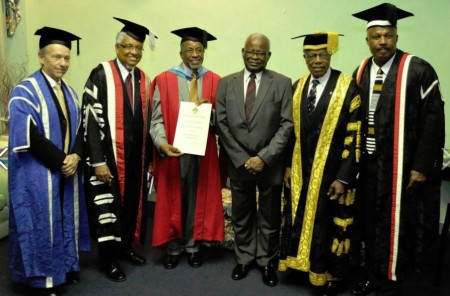 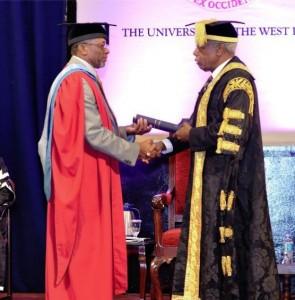 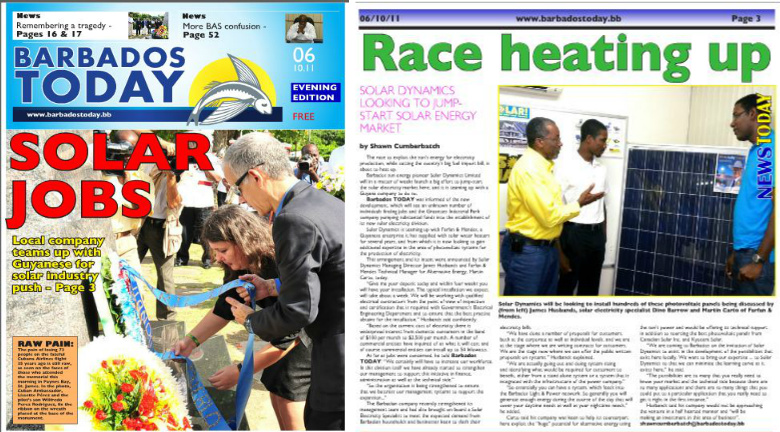 Posted in: In the News, Photovoltaics

James Husbands is “The Featured Personality” in The Caricom Energy News Letter of May 2010.

The symposium, under the theme Alternative Energy: Pathway To A Sustainable Future In Barbados, was held September 6-7 September 2010 at the Lloyd Erskine Sandiford Centre.

Download presentation on Solar Dynamics given at the Energy Conference.